The interviews with the jury and the first rehearsal

One by one the contestants described their projects to the jury. First shooting with Antonio Zanata and rehearsal with Amadia Sansonetti. 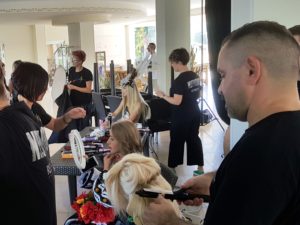 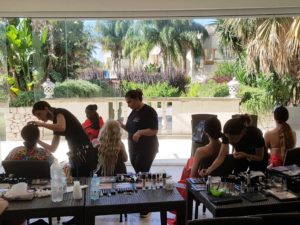 In the panoramic Sala Porticato the visagists of Gil Cagnè and the hairdressers of Infinity studied the best look for the competitors who, one by one, agreed with them on makeup and hairstyle and then explained their project to the jury, presided by Giuseppe Borrillo, director of the competition, and composed by Giusy Nobile, president, Bruno Dalto, patron of the “Miss Motors” contest that was with Rosa Fariello, winner of the title of Miss Motors Cinema 2018, the popular Dj Sergio Sansolino and Gabriella Casabona, representing the regional press.

The pool was populated by the national directors and the same contestants who, while awaiting their turn, were able to relax.

During the day Antonio Zanata made the shots for the traditional slide show “Profiles of the world”, which will open the show next Friday, and the choreographer Amadia Sansonetti has taught the first steps for the funny and colorful choreography that the girls will perform during the final.