Among the legend and the wonders of nature, the extreme edge of Puglia welcomes the Ambassadors of Progress that participate in the second world final of Miss Progress International.

One of the most romantic legends says that Santa Maria di Leuca is the transformation of the siren Leucasia in the white city whose most extreme edge, where the Ionian Sea and the Adriatic Sea meet each other, for centuries was considered the point where the world ends.

It is a source of legitimate pride for the city administration of Castrignano del Capo to add this unique event to the many international events hosted so far.

Fernando Marzo Councillor for Tourism and Territorial Planning has welcomed the proposal received by the Associazione Culturale In Progress of San Giorgio Ionico, who is the organizer.

“Miss Progress International – says Marzo – is, without a doubt, an event unique in the world, where the most diverse cultures represented by competitors who come from all five continents, are united by the goal of making the world a better place in which to live.”. 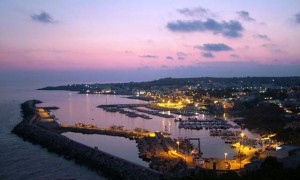 the port of Leuca after the sunset

Next May 10, starting at 11 a.m. the Messapia Hotel will host the press conference of presentation of the Ambassadors of Progress and, already in the afternoon, their journey to the discovery of Puglia will begin.
First stop will be the Sanctuary of Santa Maria de Finibus Terrae, which in 1990 St. John Paul II chose it as a minor basilica.

The Christian tradition has it that St. Peter, travelling from the Holy Land to Rome, arrived in Italy through Leuca.

Where once stood a pagan temple dedicated to the goddess Minerva was therefore built around the middle of the fourth century the shrine several times destroyed and rebuilt as a result of successive invasions.

In the days after the group, which will also include a number of foreign journalists and opinion leaders, will continue his tour by visiting Taranto, Ostuni, Alberobello, Gallipoli and Lecce before  the world final that will be broadcasted live via the web, and will let us know the name of the winner of the title of Miss Progress International 2014, who will be the one who has brought the best social project dedicated to one of the issues on which the event is based: Environment, Health, Human Rights and Cultural Integration.

The jury, in fact, will evaluate one by one the essays presented by the contestants and will pay particular attention to both their content and to their feasibility.

“Leuca has always been synonymous with hospitality – adds Mr. Marzo – like that of a mother’s womb and is proud to host an event that finally brings out the role of women far beyond its outward appearance.”.

On the official website of the event www.missprogressinternational.com are already visible the images of the Ambassadors of Progress that, in a few days, will be co-stars with the natural, historical and gastronomic beauties of Puglia.