The contestants meet the Jury

All the projects have been analyzed. It was a hard job for the members of the Jury who evaluated also the national costumes.

LEUCA – The pleasant and warm sun of Salento has accompanied one of the most important moments of Miss Progress International: the interviews with the jury that evaluated, one by one, the projects dedicated to Environment, Health and Human Rights.

Also this year the prize for the Cultural Integration will be awarded by the same competitors in the coming days when they will be called to vote who, in their eyes, better integrated herself with the others.

The jury, chaired by Giusy Nobile and Giuseppe Borrillo, respectively president and director of the competition, was also composed by Egyptian filmmaker Nora Labib, the Art Director Demis Rosafio, the logistics manager Alessio Di Fonzo, Sergio Puzzovio, director of the Messapia Hotel, by the Deputy of Tourism of Castrignano del Capo, Nando Marzo and the choreographer of the event, Lino Perrone. 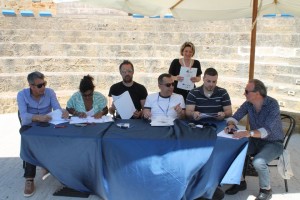 the Jury at work

As for the previous editions, it was not easy to identify which were the best works. All the contestants have demonstrated  to understand the mission of the competition, submitting projects of high content.
Another characteristic element of the overall rating was the typical costume of the folklore of the represented country.
The Italian brought by Rossella Lacava was made available by the Pro Loco of San Giorgio Ionico.