Second edition of the march in pink and double evening party

Two doctors from the European Institute of Oncology have started the march in pink at San Giorgio Ionico. A day ended with dinner at the Terra Jonica Horse Club and with a greeting from the Enjoy Fest stage.

SAN GIORGIO IONICO – Prevention and treatment of female tumors, this, in brief, is the message sent to the participants of the second edition of the “March in pink” organized by the cultural association In Progress at San Giorgio Ionico. 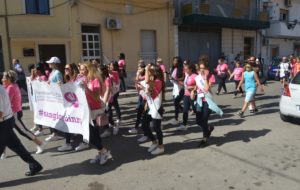 It was the central Piazza San Giorgio that served as a meeting point for the participants in the walk through the streets of the town, preceded by the greeting of the mayor, Mino Fabbiano, and by doctor Daniela Iacobone, specialist in preventive gynecology, and Germana Lissidini, senologist. Both of them attended the event representing the European Institute of Oncology of Milan, whose Foundation wanted to entrust the organizers of Miss Progress International, for the second consecutive year, as fundraisers to finance the Women’s Cancer Center. This project, started two years ago, is a point of reference, consultation, solace and support for all women affected by cancer. 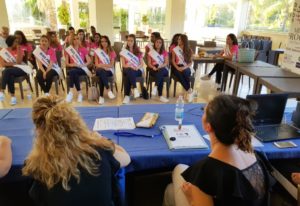 In the afternoon, the panoramic room of the Grand Hotel dei Cavalieri hosted the workshop were the contestants able to ask specific questions to the doctors who, among other topics, underlined the importance of anti-HPV vaccination.

Double appointment in the evening: the brand new Horse Club Terra Jonica, strongly desired by the Podo family that inaugurated it a few months ago, welcomed the ambassadors of Progresso with a rich buffet accompanied by local wines.

Later, acclaimed by the crowd, the contestants gave their greetings from the Enjoy Fest stage, before returning to the hotel.