Presented the Ambassadors of Progress, with the appreciation of the President of the Italian Republic

Officially presented the contestants of Miss Progress International 2014. The letter of appreciation of Giorgio Napolitano, read between the general commotion, reiterated the success and recognition of an event unique in the world.

S. Maria di Leuca (LE ) – The welcome of the city of Castrignano del Capo made by its mayor, Anna Maria Rosafio and addressed to the Ambassadors of Progress, was marked by three keywords: “The joy in seeing your smiles, your beauty and the beauty of  Leuca which is hosting you and the sharing of your ideas for peaceful coexistence.” 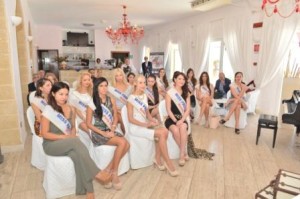 the contestants of Miss Progress International 2014 during the press conference

At Messapia Hotel spoke also the commissioner for Budget and Tourism, Nando Marzo, who narrated the legend of the mermaid Leucasia that became the “white city”, which has become synonymous with welcoming for tourists and pilgrims, and Giusy Noble, President of the Associazione Culturale In Progress, who read to the message of appreciation received by the President of the Italian Republic, Giorgio Napolitano.
“Miss Progress International – added Giusy Noble – is the result of a collective effort in the service of humanity, for its social and cultural growth, which should be supported by institutions and media, and for this we thank the Regione Puglia, which has understood the essence and purpose of the event, also as an efficient tool of promotion of the territory.” 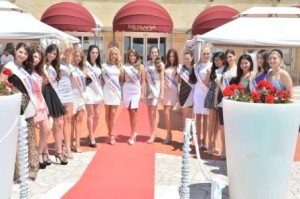 the first group at the Messapia Hotel

Also the organization team members were introduced to the press. They are all volunteers and professionals who are paying great attention to the details with which the event has been organized.

After lunch the group has made a tour in the town of Leuca, enjoying the beauty of the places and also a rich artisanal ice-cream, before returning to the hotel and rest.