Between alleys and churches, passing from the Museum Barba, the competitors have enjoyed a great day started at the Teatro Garibaldi and ended with a lunch of fish.

Gallipoli – Defined by all a “favor”, the Garibaldi Theatre of Gallipoli, located in the historic center in the street dedicated to the hero of two worlds, was the starting point for visiting the town and the place where the Councillor Piteo, representing the municipal administration, gave the welcome to each of the contestants of Miss Progress International 2014 which received from his hands some nice gifts and a city guide.

the contestants in the Teatro Garibaldi’s theater boxesi. In the middle, Giusy Nobile and Giuseppe Borrillo

The walk through the streets, led by an expert local guide, touched the most representative places of the long history of Gallipoli and made a stop at the Museum “Emanuele Barba”, which houses many archaeological finds of the civilizations that have occurred during the centuries. 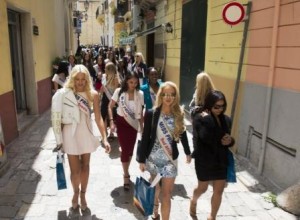 along the alleys of Gallipoli

The mild climate has made it possible to enjoy the hike in elegant clothes, since the visit of the city was then concluded at one of the best restaurants in the region, the one of the Hotel “Al Pescatore”, which served delicious local seafood. One of the dishes was spaghetti that, for girls less accustomed to the common gesture of rolling hem with a fork, required the use of the knife (!). 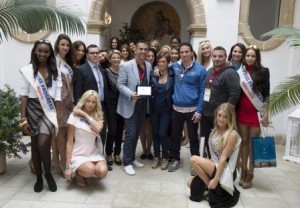 at the Hotel “Al Pescatore” with its owners, the Corciulo family

On the way back the group stopped on one of the magnificent beaches of Marina di Pescoluse where the Ambassadors of Progress have admired and appreciated the fine sand on which they were literally unleashed, some even venturing into the water whose temperature was low.

leaping on the beach!