The contestants of Miss Progress International 2022, who came from five continents to discover the capital of the Baroque and Salento, were presented to the public. In the afternoon, a bicycle tour of the Punta Pizzo park organised with the Italian Fund for the Environment.

LECCE – The Teatrino hall of the former Palmieri boarding school, provided by the Province of Lecce, welcomed journalists this morning to meet the Ambassadors of Progress. Arriving in Salento from all over the world, they greeted Apulia that welcomed them, before giving themselves over to interviews and the inevitable selfies. 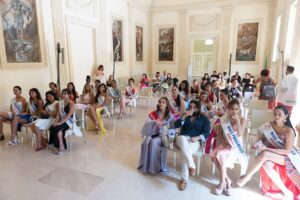 Countless snapshots were taken of the beauties of Lecce by all the members of the colourful multi-ethnic group, before relaxing in the elegant Palazzo BN, pride of the city, which offered a tasting of local gastronomic products and wines. 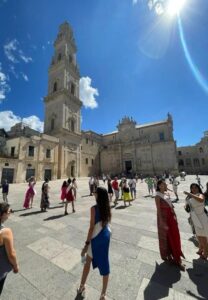 In the early afternoon, the territorial section of the Italian Environmental Fund (F.A.I.) accompanied the group through the narrow streets of Gallipoli and then, by bicycle, to visit the small church of San Pietro dei Samari, one of the heartland sites to be protected, before enjoying an aperitif in the bay of Gallipoli for a fairytale sunset. 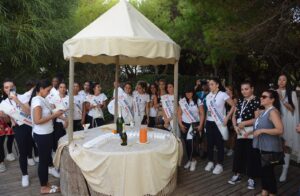 a toast at sunset