The 22 contestants have been presented to the press and the public of the largest shopping center of Taranto. Journalists and customers crowded the event. In the afternoon the class about integration held by George Sada and the first photo shootings by Antonio Zanata.

TARANTO – Hundreds of curious eyes have carefully followed the arrival of the Ambassadors of Progress participating in the seventh edition of Miss Progress International. Dressed up as it should be for such an occasion, they could not go unnoticed, proud to wear, in addition to elegant clothes, also the band that indicates the country of origin. 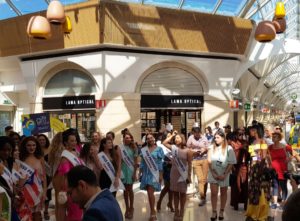 Mauro Tatulli, director of the mall, Giusy Nobile (president) and Giuseppe Borrillo (director of the competition) representing the organizational team, Maria D’Urso, press officer, Eyra Baquero, the Colombian title holder last year and Fabio Millarte, president of the local section of the WWF took their turns at the microphone.

Each of the competitors then greeted the public who had the opportunity to get to know the representatives of the five continents.
On the way back to the Grand Hotel dei Cavalieri, the traditional stop at the headquarters of Fiorino Srl, official partner of the event. 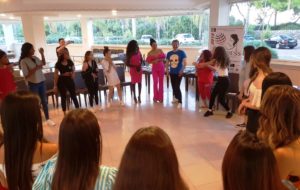 George sada with the contestants

In the afternoon the class about integration held by the Brazilian actor George Sada and, in the evening, a relaxing dinner and the first Antonio Zanata’s photo shootings sessions. 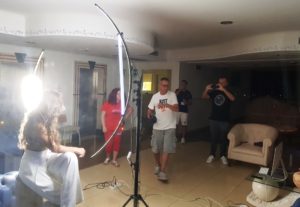