The crucial moment of Miss Progress International 2014: the interviews with the jury

Interviewed one by one the Ambassadors of Progress that showed the jury their national costumes. The result, of course, is top secret.

Santa Maria di Leuca, May 12 – As scheduled, the day was entirely dedicated to the meeting of the contestants of Miss Progress International with the Jury, presided by Giusy Noble, president dell’Associazone Culturale In Progress and composed by Giuseppe Borrillo (director of competition), Nando Marzo (Councillor for Budget and Tourism of Castrignano del Capo), Sergio Malfatti (one of the official photographers), Sergio Puzzovio (director of the Messapia Hotel hosting the event) and Lino Perrone (the choreographer of the world final). 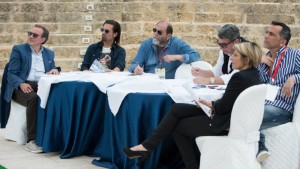 The contestants presented themself to the jury wearing their traditional dress: a veritable explosion of colors, beauty and culture, given that each of the costumes symbolizes the folklore of the nation represented. Obviously,  since the final show live broadcasted via the web will begin with the arrival on the scene of the competitors, those images remain top-secret.

The only information that the organizers have leaked regarding the results are an example of diplomacy: ” this year – said Giusy Noble – our competitors have shown great attention to the social issues assigned to them and declaring the winner will be a very difficult task”.

The day ended with the teaching of the steps of the Pizzica dance by the young choreographer from Manduria Leonardo Moscogiuri who also explained the origins and meaning of the dance itself.