The ancient farm of Crispiano and the auction for charity

With the trip to Crispiano, territory of the one hundred farms, the curtain falls on the 2019 edition of Miss Progress International. Big final party and auction in favor of the IEO-CCM Foundation.

CRISPIANO – It has been a relaxing morning for the all the competitors of the seventh edition of Miss Progress International. At the Grand Hotel dei Cavalieri, Antonio Zanata, official photographer of the event, portrayed the winners and, after lunch, the group moved to Crispiano.

The centuries-old olive trees and the eighteenth-century structure of the Masseria Quis ut Deus have been a magnificent example of what the “territory of the hundred farms” offers to visitors. Luca Lopomo, mayor of the city, gave his welcome message, wishing the best to the all the contestants, during a honey tasting offered by some local producers. 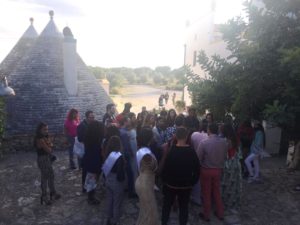 We then moved to Grottaglie, to inaugurate the “Officine Formazione” headquarters, sipping with the excellent sparkling white wine “Solo” of Cantine Soloperto.The dinner with the legendary orecchiette was animated by the auction in favor of the IEO-CCM Foundation of Milan and the evening ended with the farewell dancing-party until it was time to return to the hotel to get ready to face the journey home for all Ambassadors of Progress and their National Directors. 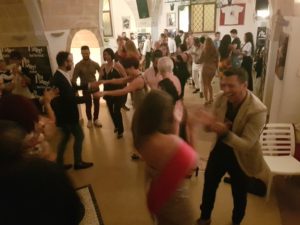