In Matera, among the Sassi and movie sets

The Ambassadors of Progress in the European Capital of Culture 2019: the views from the belvedere and the long walk on paved roads, ended just in front of the set of Mel Gibson’s “The Passion”.

MATERA – The announcement made at the microphone on the bus that carried the competitors of Miss Progress International 2016 in Matera has not been enough to describe the beauty of the show that they and their companions were about to watch.
The group was accompanied just a few steps away from Piazza Vittorio Veneto, whose “underground” immediately triggered selfies and poses smiling for one of the most scenic attractions of the Lucanian city, UNESCO world heritage. 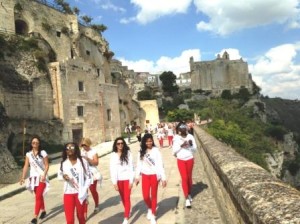 The path has been articulated through the church of Saint John Baptist, the lookout and the panoramic view on the canyon, San Pietro Caveoso square and included a visit to Casa Grotta, before ending with a tasty cocktail at Basiliani Hotel, right across from the movie set that Mel Gibson chose for “The Passion”. 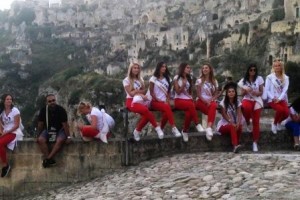 The interviews conducted by the team of Channel 85, which follows the event every day, have had an incomparable landscape as background, which distinguishes the European Capital of Culture of 2019.